Chanin’s father died in 2011 in case of cirrhosis, he therefore has to live with his grandmother alone. His mother took his younger sister with her to live in a province far from home and she works as a casual worker and she sends 1,000 – 2,000 baht a month home. His grandmother is old and she could not work hard she only receives 700 baht a month from the Elderly Fund of the government to pay the household expenditure. His grandmother is not well and her eyes could not see clearly so she always has to wear glasses. It was effected from being in an incubator when she was born. After school he helps his grandmother to do housework. On weekends and vacation he helps his relatives or his neighbor to sell clothes around a flea market for 200 baht a day in order to earn money for his food, anyway they are in trouble because of their income less than their expenditure. 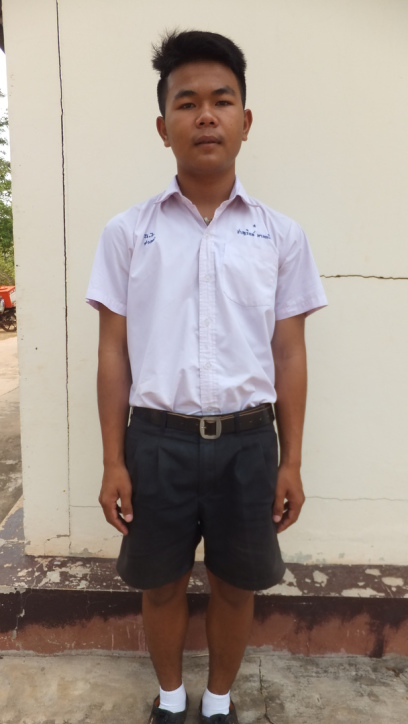 Chanwit’s parents separated since his father got pregnant to him and his mother got remarried in 2005. His mother and his step mother live with HIV/Aids and they take an anti-virus medicine often they therefore are in good health and they can be able to work well. His step father works as a gardener at the Friendship Garden and his salary is 6,000 baht. Chanwit is unable to hear well it was in case of ear inflammation as well as his mother so when they speak they have to speak loudly. His mother works at Hands of Hope Project and her salary is 5,000 baht. She goes to work by the project’s mini bus every day. The main income of the family comes from his step father and his mother. Both of his parents receive HIV/Aids Allowance for 1,000 baht a month altogether. Chanwit’s younger sister presently studies in the fourth year, her mother took anti-virus from mother to child and after she was born she has been checked HIV/Aids fourth times already and the result came out negative from HIV/Aids. Chanwit presently studies in the second year of high school at Namsuey Wittaya School, he goes to school by mini bus that charges 300 baht a month. He is talented in playing guitar and sing songs. After school he helps to do housework and he practices playing guitar. 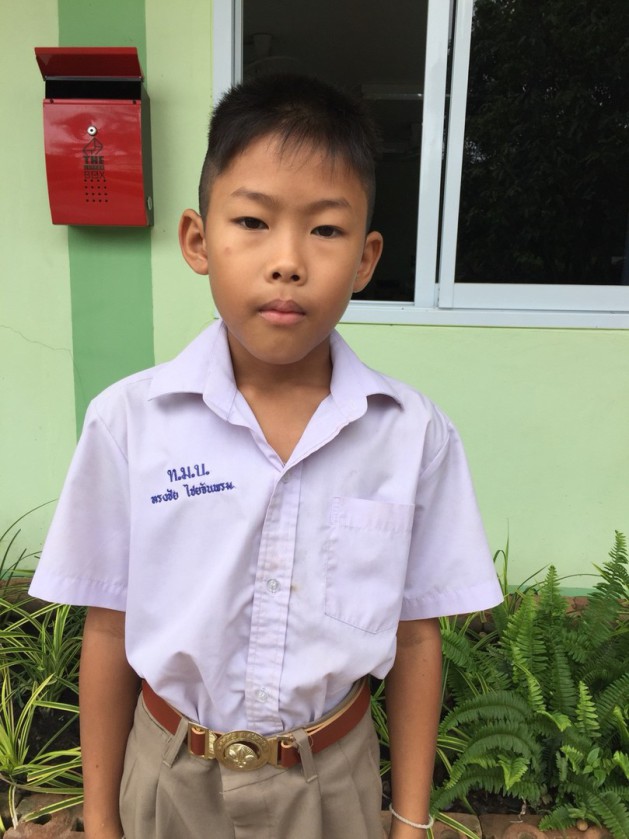 Songchai ‘s family don’t have own rice field. They have to buy rice to eat all year. Last year Sondchai’s parents were separated and mother moved to live in the other village. Songchai and his older brother live with father. His mother sends some money to Songchai but it is not enough. Songchai’s father was infected with HIV. He has medicine every day and he can works. He has to pay debt 4,000 baht to bank every month because 2 years he borrow money from bank to open the small garage and buy repair equipment. But he did not have many customers. Now he stop to repair car and he sell braised chicken on the main road in the town of Thabo district and he gets 300-400 baht per day. Songchai’s older brother finishes the study at Non-formal Education. He works at rice mill and gets 200-300 baht per day. Songchai studies in the 4th year primary school. He likes to paint and draw and play football. He wishes to be soldier in the future.

Pachakorn is 7 years old, he studies in the 5th year of primary school. He is a cheerful boy and he likes to play soccer and sings songs and dance. He wants to be a teacher when he grows up. His parents live at a house of Pachakorn’s grandmother. It is a very old single storey house with leaked roof. The house is on a low area that is very difficult to travel during the rainy season. His father is a tri-cycle rider and his earning is 300-400 baht a day but since Nongkhai has many tri-cycle taxi and it also has so many ways to travel it is therefore not many customer who want to travel by tri-cycle. His mother does not go to work as she is not well, she is therefore at home and does housework and takes responsibility to send her children to school. 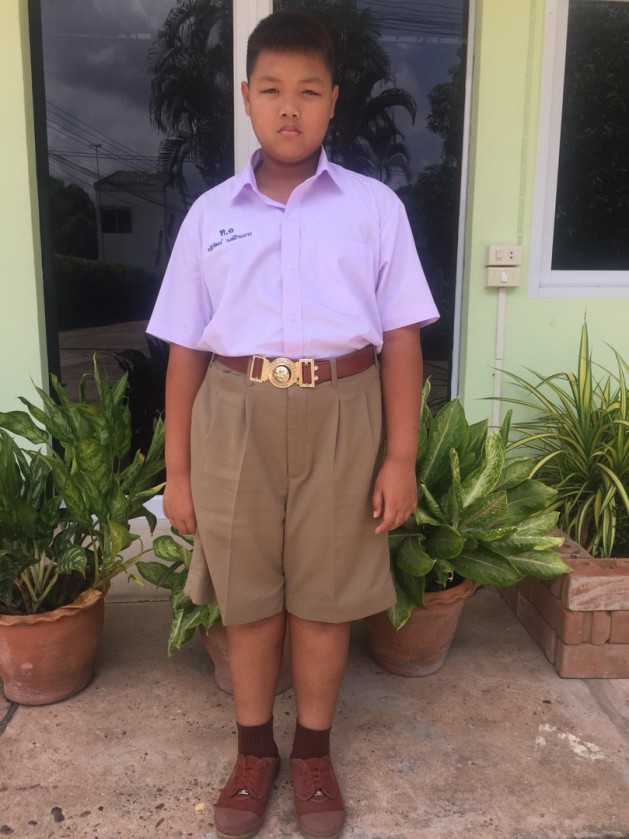 Natthawat’s parents were separated in 2013 and his father got remarried. Anyway he has supported the family 2,000 baht a month. Natthawat’s family has no house of his own, they live at a house of his uncle that is a single storey wooded house. His mother has no job, she makes Thai’s dessert and sell around the village. Her earning is about 4,500 baht a month and she is sometime help her relative in order to get some supplementary income.

Natthawat presently studies in the fifth year of primary School. His result was 3.16. His favorite subject is Thai and he is a school soccer player. After school he helps his mother to sell dessert around the village and he wants to be a soccer player of the Nation. 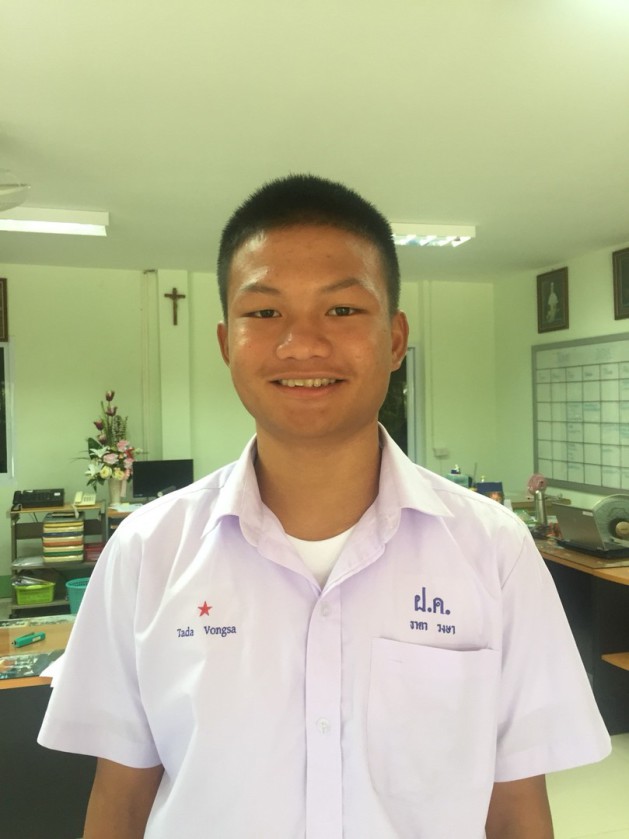 Thada’s family has no rice field of their own and they built a house on a public land, it is a one storey cement house. His father works at a construction site in the town of Nongkhai and he sometimes works in the village.

His mother is at home looking after her children and does housework. She sometimes works as a casual worker and hire her relative to look after her children and gradnson, a child of Thada’s older sister, she separated with her husband and left her child with her mother and she goes to work at a factory in Ayuthaya province and sends about 2,000 baht a month home.

Thada achieved a grade point average of 2.94 is 4.00 is the best, he wants to be an army and he talented in sport. He is a school soccer player and he got a golden medal from a contest of Science (Glider artificial). He is a representative of Student Council, student committee and he has a leadership characteristic.

Kongphop’s family are farmers, they do rice farming on 7 rais of rice field and they get 50-70 sacks of rice a year as it is a field on a high land therefore the production is not good enough and it often has natural disaster. After rice farming his father goes to work at a factory in Bangkok and he sends about 3,000 -4,000 baht a month. He gets sick with diabetic, blood pressure and heart attack and he need to see the doctor upon his appointment. His mother is a casual worker around the village but she sometimes has to take care of Kongphop’s grandmother who is a disable people and she could not help herself. His mother also takes care of her nephew age 9 years old (a son of her older sister who separated with her husband). Their house is an one storey cement house that is not yet completed. Kongpop presently studies in the first year of primary School, he has good develop, cheerful. He helps his family to do housework. His favorite sport is soccer and his favorite subject is Thai. He wants to be a policeman when he grows up.